9. Identify the number of protons, neutrons, and electrons in the follow...
Which of these drawings represents a Ca atom, which an Na^+ ion, and whi...
Choose the region of the atom that accounts for most of its mass.
Watch concept videos about Subatomic Particles

Which one of the following statements is not true? A) Nucleons are held together in a nuclide by an electromagnetic force B) Oxygen-15 is unstable because it has too few neutrons. C) All nuclides with Z > 83 are unstable and ultimately decay into more stable nuclides with smaller Z values D) As the atomic number increases, the ratio of neutrons to protons in a nuclide generally increases E) Generally, the number of neutrons in a nuclide nearly equals the number of protons when the atomic number is small (Z < 18). 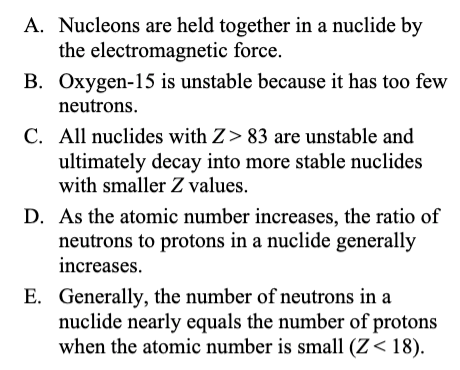 "Clutch really helped me by reinforcing the things I learned in class and making exam reviews a breeze. If it weren't for Clutch Prep, I would have definitely failed the class."

University of Texas at Austin