43,798 students have used Clutch for Phy
97% got a better grade
3,312 minutes of Physics videos
Start Learning for Free

A 1.25-kg wooden block rests on a table over a large hole as in the figure. A 5.00-g bullet with an initial velocity vi is fired upward into the bottom of the block and remains in the block after the collision. The block and bullet rise to a maximum height of 22.0 cm. Calculate the initial velocity of the bullet from the information provided. 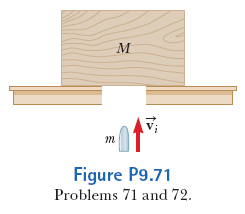 A cannon is rigidly attached to a carriage, which can move along horizontal rails but is connected to a post by a large spring, initially unstretched and with force constant k = 2.00 X 104 N/m, as shown in the figure. The cannon fires a 200-kg projectile at a velocity of 125 m/s directed 45.0° above the horizontal. Assuming that the mass of the cannon and its carriage is 5000 kg,
(a) Find the recoil speed of the cannon.
(b) Determine the maximum extension of the spring.
(c) Find the maximum force the spring exerts on the carriage.
(d) Consider the system consisting of the cannon, carriage, and projectile. Is the momentum of this system conserved during the firing? Why or why not? 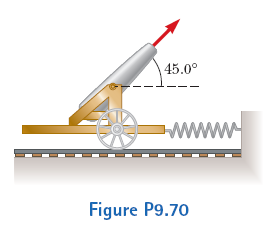 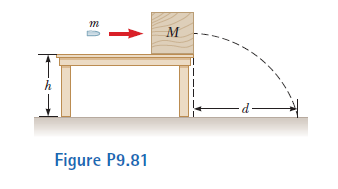 A 3.00-kg steel ball strikes a wall with a speed of 10.0 m/s at an angle of θ = 60.0° with the surface. It bounces off with the same speed and angle as shown in the figure. If the ball is in contact with the wall for 0.200 s, what is the average force exerted by the wall on the ball? 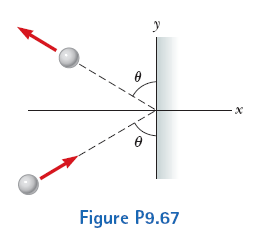 A uniform piece of sheet metal is shaped as shown in the figure. Compute the x and y coordinates of the center of mass of the piece. 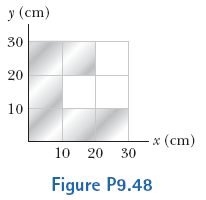 A 10.0-g bullet is fired into a stationary block of wood having mass m = 5.00 kg. The bullet imbeds into the block. The speed of the bullet-plus-wood combination immediately after the collision is 0.600 m/s. What was the original speed of the bullet?

After a 0.300-kg rubber ball is dropped from a height of 1.75 m, it bounces off a concrete floor and rebounds to a height of 1.50 m. (a) Determine the magnitude and direction of the impulse delivered to the ball by the floor. (b) Estimate the time the ball is in contact with the floor and use this estimate to calculate the average force the floor exerts on the ball.

A 65.0-kg boy and his 40.0-kg sister, both wearing roller blades, face each other at rest. The girl pushes the boy hard, sending him backward with velocity 2.90 m/s toward the west. Ignore friction.
(a) Describe the subsequent motion of the girl.
(b) How much potential energy in the girl’s body is converted into mechanical energy of the boy–girl system?

An object has a kinetic energy of 275 J and a momentum of magnitude 25.0 kg•m/s. Find the speed and mass of the object. 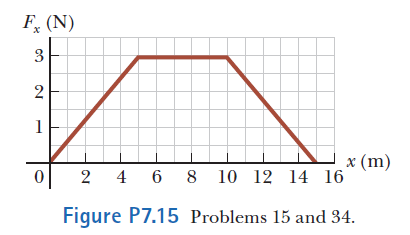 A uniform chain of length 8.00 m initially lies stretched out on a horizontal table. Assuming the coefficient of static friction between chain and table is 0.600, show that the chain will begin to slide off the table if at least 3.00 m of it hangs over the edge of the table.

A block of mass m1 = 20.0 kg is connected to a block of mass m2 = 30.0 kg by a massless string that passes over a light, frictionless pulley. The 30.0-kg block is connected to a spring that has negligible mass and a force constant of k = 250 N/m as shown in the figure. The spring is unstretched when the system is as shown in the figure, and the incline is frictionless. The 20.0-kg block is pulled a distance h = 20.0 cm down the incline of angle θ = 40.0° and released from rest. Find the speed of each block when the spring is again unstretched. 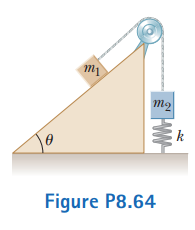 A block of mass m = 2.50 kg is pushed a distance d = 2.20 m along a frictionless, horizontal table by a constant applied force of magnitude F = 16.0 N directed at an angle θ = 25.0° below the horizontal as shown in the figure. Determine the work done on the block by
(a) the applied force
(b) the normal force exerted by the table
(c) the gravitational force
(d) the net force on the block 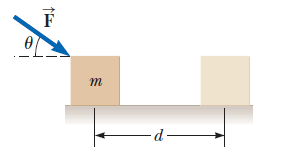 A boy starts at rest and slides down a frictionless slide as shown in the figure. The bottom of the track is a height h above the ground. The boy then leaves the track horizontally, striking the ground at a distance d as shown. Using energy methods, determine the initial height H of the boy above the ground in terms of h and d. 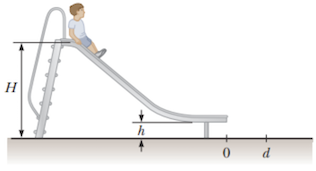 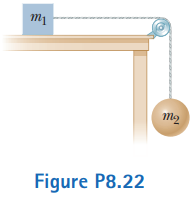 A sled of mass m is given a kick on a frozen pond. The kick imparts to the sled an initial speed of v. The coefficient of kinetic friction between sled and ice is µk. Use energy considerations to find the distance the sled moves before it stops.