Ch 21: The Second Law of ThermodynamicsWorksheetSee all chapters

See all sections
Learn
Next SectionEntropy and the Second Law

Remember that a heat engine requires a clockwise cycle on a PV diagram. Clockwise means the work of the gas making up that engine is negative and that means that work is released and you want an engine to release work. You want to produce usable work that the machine can use. This is required like I said clockwise cycles are required to have energy released for exactly this reason that I just wrote over here. Refrigerators can also be described as cycles on a PV diagram and gas in a refrigerator should absolutely undergo a cyclic process, that way it starts and ends at the same state so you can keep doing it cycle after cycle after cycle. It's the same reason why you want engines to be cyclic processes. However a refrigerator requires work to be input, work to act on the gas that means that the cycle needs to be counterclockwise because counterclockwise means that the work of the gas is positive which means that work was acting on the gas, that the gas absorbed energy. So in order for you to have a refrigerator described on a PV diagram, the cycle has to be counterclockwise because that's the requirement for having work being absorbed by the gas. These are two cycles right here we see that this is clockwise which means that work is released because the work of the gas is negative, the gas loses energy, that energy is released which means that this is an engine. On the right we have a counterclockwise rotation. Counter means work is absorbed, absorbed is not spelled with an O just a pro tip there guys, I'm not the greatest speller in the world. Work is absorbed the gas gains energy the work on the gas is positive and this means that this is a refrigerator. So that's just what two PV diagrams would look like one for refrigerator, one for an engine. Counterclockwise, clockwise.

Let's do an example. The cycle undergoes, sorry, the cycle a gas undergoes in a refrigerator shown in the following PV diagram. How much work is required to operate the refrigerator? How much work does the refrigerator need in each cycle in order to go on? Any cyclic process, the amount of work by the cycle is just the area enclosed by the cycle. This area is simply base times height, it's just a rectangle. The base is the difference in these volumes which is 0.002 this is the correct unit meters cubed and the height is the difference in these pressures from 1 to 5 is 4 but don't forget you're going to need that 10 to the 5 in order to have the right units. So this is 0.002 times 4 times 10 to the 5 Pascals which plugging it into calculator is 800 joules. So the work absorbed is 800 joules and that's how much work each cycle of the refrigerator requires to operate. Besides this guys, besides a cycle in a refrigerator being counter whereas a cycle in an engine is clockwise, all the same rules apply in all the same equations that we learned in the thermal processes apply for cyclic processes. This is just another cyclic process like an engine is a cyclic process but it's moving in the opposite direction. That wraps up this discussion on refrigerators and specifically cycles of gases on PV diagrams to describe refrigerators. Thanks for watching guys.

Practice: A monoatomic ideal gas is refrigerated in the following cycle. What is the coefficient of performance of the refrigerator? 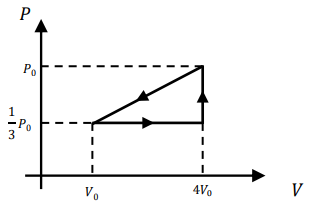 Concept #1: Refrigerators and PV Diagrams
Practice #1: Coefficient of Performance of Refrigerator
Previous SectionIntro to Refrigerators
Next SectionEntropy and the Second Law