Another exception to the rule, these are compounds that remain achiral even though they have chiral centers!

This should say Enantiomers :)

So now I'm going to talk about another exception to the chirality rules that I taught you. And this exception has to do with the rule about two or more chiral centers. Remember that I told you guys that if a molecule has two or more chiral centers, that it's pretty much always going to be chiral, just assume that it's chiral. Well, it turns out that there is one exception to that and that's meso compounds, so let's go ahead and get into this.
Meso compounds are specific types of molecules where you basically have two chiral centers that perfectly cancel out that yield two identical diastereomers. So what that means is that after forming these stereoisomers, two of them are going to wind up being the same, meaning that it's actually going to be achiral.
So there's a few facts that you should know about meso compounds. First of all, meso compounds have an internal line of symmetry. Remember test one had to do with internal line of symmetry. So that means many times we actually will be able to use test one to predict that they're actually achiral. But sometimes we're not going to be able to use that test which is why I'm going to give you guys some other rules specifically for meso compounds.
It turns out that because two of the stereoisomers are identical, instead of following the 2 to the n rule for total number of stereoisomers, we're actually going to follow the 2 to the n minus 1 rule for stereoisomers. What that means is that that minus 1 accounts for the fact that two of these stereoisomers are going to turn out to be identical, so instead of, for example, having four total stereoisomers, if I had two stereocenters, it would turn out to be three instead of four because two of them would count to be identical.

Concept #2: The 3 rules of meso compounds.

But I know what you guys are interested in is these rules, right? So let's talk about these rules. There's three rules that will help us predict if a molecule is meso. Believe me, this is going to help you so much because in your textbook and according to your professor, it's very difficult to tell when something's meso or not. A lot of times they just expect you to recognize it, but I prefer to have rules.
Here are the criteria. First of all, it has to have two or more chiral centers. It can't have less than two. So if it has one, that's not meso. If it has two, maybe it's meso. Three, maybe it's meso. Two or more.
The second criteria is that it has to be atomically symmetrical. Now this is actually really tricky to communicate because that doesn't mean perfectly symmetrical it just means that everything has to be connected in the same way on both sides even if wedges and dashes don't match up. That's okay. I just need the atoms to be in place. Symmetrically.
Then finally, I need an even number of the chiral centers to be opposite to each other. That means that if that I have two chiral centers, I need two of them to be opposite to each other. That means that I need my first one if it's R, I need the other one to be S. If this first one is S, I need the other one to be R. Why is this? Because this has to do with the part about canceling out that I was talking about. I need for these chiral centers to cancel out so that overall the molecule, even though it has two chiral centers, it will overall be achiral because they'll perfectly cancel each other out.
Let me go ahead and give you a really simple version of a meso compound and it would be something like this. Let's say that I had a cyclohexane and I had a wedge here and I had a wedge here. This is an example. There's lot of different meso compounds out there, but this is an example of a meso compound.
Why is that? First of all, do I have any chiral centers? Yeah, I happen to have two. This is a chiral center and this is a chiral center. So both of these are chiral centers because if you count the groups, if you go around, the directions are different depending on which side you take, so the R groups are different so these are two different chiral centers.
Is this molecule chiral? No, it's not. Because if you look, it actually has an internal line of symmetry. If it has an internal line of symmetry, that means it's achiral.
But another way you could tell is by looking at the actual configurations of the chiral centers. What I would see is if I went ahead and figured out the chiral centers like the priority one, two and three, what I would find out is that this one goes around this way. And then I would find that this one goes around this way. So what I would find is that one of these is an R and one of these is an S and they're symmetrical to each other. They are both the same distance from the middle.
So what that means is that this is another way of proving that it's meso by looking at the configurations and saying, hey, they're opposite and they're symmetrical and there's two or more of them, so this is meso.
Now you guys might be wondering, “Johnny, that looks so much more complicated than just doing the internal line of symmetry. Why don't I just do the test one, internal line of symmetry test?” You can if it's a ring. But remember, that only really works for rings. For other kinds of compounds, it doesn't work.
So for example, (a) and (b), these compounds that I'm going to give you down here, you really should use that test because that test is not going to work very well for these. So what I want you guys to do is go ahead and start on (a) and try to figure out the three things, how many chiral centers there are, what they're configurations are and if it's symmetrical. Then once you figure that out, tell me if you think it's meso or you think it would just be a normal chiral compound. All right, so go ahead and try to solve (a) and then I'll show you guys how to do it.

A compound will be meso if it meets the following 3 criteria:

Is the following molecule meso and therefore achiral? 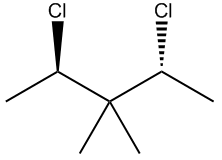 Example #1: Which of the following molecules are meso, and therefore achiral?

Is the following molecule meso and therefore achiral? 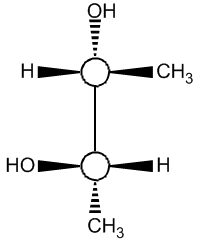 Example #2: Which of the following molecules are meso, and therefore achiral?