There are several common projections used to visualize molecules in different perspectives.

So like I said, like Newman projections, there's actually a lot of different types of projections. As you can see, this one right here is called a Fischer projection. It's used mostly for sugars. So later on if we get into sugar chemistry and carbohydrates, we're using Fischer projections a lot. But they're also used in this chapter as well.
Two other common ways that are used are Haworth projection. The Haworth projection is just that 3D projection of a ring, that's the actual name, and it's usually used for rings. It's used to highlight what's at the top and what's at the bottom.
Then finally we have this one called a sawhorse projection. And this one's usually used for stereochemistry. It will basically say how these atoms are related to each other in terms of their orientation and their shape, their configuration.
Well, in all of these cases, whichever projection we're using, also remember that there's Newman as well, in all these cases we're going to have to convert them into bondline before analyzing them completely. What that means is that these projections are really good for analyzing certain types of things, but if we want to compare them against other normal molecules, we're going to have to convert them into bondline first because that's our metric system. That's our standardization.

We will need to know how to convert these into bondline so that we can analyze them.

Concept #2: How to convert Fischer projections into bondline structures 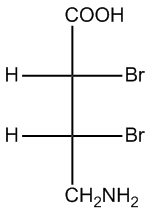 Alright guys so let's go ahead and go step by step, the first step would be to redraw this with the wedge and the dash so I would put this on a dash and I would put this on a dash, I would put these guys on wedges, B-R, B-R, H H is that cool so far? Now what I want to you is I'm going to draw my angle because that's going to help me remember what things look like, OK? Notice that I have carbon 1 here carbon 2 here, these are the back of the caterpillar so now when I convert this into a caterpillar what it's going to look like it's like this? Where I have atom 1, atom 2 that's the back of the caterpillar what it's going to have here is COOH, what it's going to have one over here is CH2 and H2 now I just to figure out what's on the top? What's on the hairs, OK? So it should actually be really simple I should just have for my wedges I should have H and H, OK? Because those are the ones that are closest to the eyeball. For the back what I should have is BR BR, is that making sense so far? Cool, now I think a question that some of you guys might have is that I notice that before up here I was drawing the Hs on the right side and the front the wedge on the right and the dash on the left and then here I was drawing the wedge on the left and the dash on the right, it does not matter you can draw them however you want as long as the thing that's in the front is still in the front, the thing that's in the back is still in the back, alright? So now we have our caterpillar so now how do we convert this into bond line? All I do is I rotate every other bond or what I want to make sure every other atom is faced down, every even atom is faced down so what that means is that it's going to be atom 2, OK? So atom 2 is going to be the one that has to face down, OK? So let's go ahead and convert this what that means is that now this is going to turn into this, this and that where this is now atom 1, this is atom 2, OK? So now I'm going to actually subtract myself from here take myself out so that I don't get in the way so now what should be coming off of 1? What should be coming off of 1 is the same thing as before, I should have the H in the front but I don't have to draw Hs so I'm just going to draw the BR in the back, is that cool? So what should be coming off of the one that's on the left of 1, the one right here what should be coming off of there? Well what I should have there is just the COOH just like before, OK? Cool, what should be coming off of the carbon over here? This should be the CH2 and 2, OK? So then finally what should be coming over right where my head should be? What should be at the 2? Well because of the fact that 2 had to switch down that means that the BR has to switch its location so that means that may BR should actually face towards the front and there you go that is bond line structure, OK? So basically this is how you make a bond line structure from a fisher projection, notice that you can't just do it in one step you have to do multiple steps to get here but if you're consistent I think you guys will be able to do this just fine.