What happens when you have 2 Carboxylic Acids on the same chain? Let's take a look.

I quickly just want to touch on the diacids guys. So, anytime you have to carboxylic acids on the same chain it's called a diacid and you might want to know the first three most simple diacids, okay? The first one is called oxalic acid, the second one's called malonic acid, and the last one is succinic acid, okay? These will have varying levels of relevance this semester, malonic acid is huge and you're going to hear that a lot, oxalic not so much, succinic comes up a little bit, okay? The biggest thing is just these might come up. So, you should know at least the three most simple ones, if you'll notice they start off with the letters o, m, s. So, I was trying to think of a way that you could remember them and then that took me back to that South Park episode where Cartman goes like five hundred years in the future and it's a bunch of atheists and instead of saying, oh my god, they say, oh my science, because they're like you know so godless and I think that's perfect. So, now you guys memorized it, that's not leaving your head, right? Oh my science, oxalic malonic succinic, alright? Perfect. So, let's move on to the next topic.

Practice: Provide the common name for the following compound. 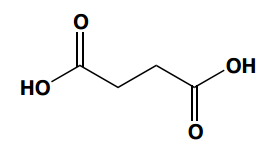