Problem: Which of the following is a possible set of quantum numbers?

🤓 Based on our data, we think this question is relevant for Professor Covey's class at WEBER.

We’re being asked to find which set of quantum numbers is possible.

Recall that the quantum numbers that define an electron are:

• Principal Quantum Number (n): deals with the size and energy of the atomic orbital. The possible values for n are 1 to ∞.

• Angular Momentum Quantum Number (l): deals with the shape of the atomic orbital. The possible values for l are 0 to n – 1.

• Magnetic Quantum Number (ml): deals with the orientation of the atomic orbital in 3D space. The possible values for ml are the range of –l to +l.

Which of the following is a possible set of quantum numbers? 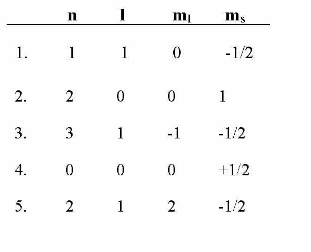 What is the difficulty of this problem?

Our tutors rated the difficulty ofWhich of the following is a possible set of quantum numbers?...as medium difficulty.

Our expert Chemistry tutor, Dasha took 2 minutes and 45 seconds to solve this problem. You can follow their steps in the video explanation above.

Based on our data, we think this problem is relevant for Professor Covey's class at WEBER.