Many transuranium elements, such as plutonium-232, have very short half-lives. (For 232Pu, the half-life is 36 minutes.) However, some, like protactinium-231 (half-life = 3.34 X 10  4 years), have relatively long half-lives. Use the masses given in the following table to calculate the change in energy when 1 mole of 232Pu nuclei and 1 mole of 231Pa nuclei are each formed from their respective number of protons and neutrons. 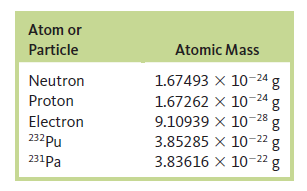