Problem: A portion of a two-dimensional "slab" of NaCl(s) is shown here in which the ions are numbered.Which colored balls must represent sodium ions?

We have to determine which colored balls represent sodium ions in the given diagram for NaCl.

An ionic compound is made from a cation and an anion.

A portion of a two-dimensional "slab" of NaCl(s) is shown here in which the ions are numbered. 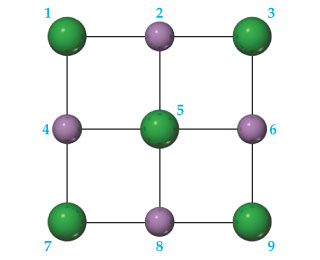 Learn this topic by watchingChemical Bonds Concept Videos
All Chemistry Practice Problems Chemical Bonds Practice Problems
Q.The measured dipole moment of BrCl is 0.57 D. If you assume the bond length in BrCl is the sum of the atomic radii, what are the partial charges on th...
Q.A classmate of yours is convinced that he knows everything about electronegativity.In the case of atoms X and Y having different electronegativities, ...
Q.Which of these elements is unlikely to form covalent bonds?S, H, K, Ar, Si
Q.In the following pair of binary compounds determine which one is a molecular substance and which one is an ionic substance. PbCl4 and RbCl.
See all problems in Chemical Bonds