Ch.8 - Periodic Properties of the ElementsWorksheetSee all chapters

In this new video, we're going to take a look at ionization energy.
We're going to say that metals, we've talked about this before, metals tend to lose electrons. If you're losing negatively charged electrons, then you become a positive ion called a cation. Ionization energy is just the energy it takes to remove an electron. If you lose electrons very easily, you're not going to need a lot of energy to remove them because metals are just giving them away for free. We're going to say, therefore, metals have low ionization energies.
Nonmetals, on the other hand, they love to gain electrons, to become negative ions called anions. Ionization is the energy it takes to remove an electron, but if I love to gain electrons, you're going to have to fight very hard with me to take the electrons away from me. As a result, we're going to say that nonmetals have high ionization energies.
Like we said, ionization energy is the energy in kilojoules or joules required remove an electron from a gaseous atom or ion. We're going to say generally speaking, ionization energy is going to increase going from left to right of a period. It's going to decrease going down a group. It decreases going down a group because as you go down any group, you become more like a metal. Metals like to lose electrons very easily. Therefore, there's not much energy required to remove them. If we see this little box here, we'll just say it increases going this way and it decreases going this way. Just remember that trend.
A good example here, we just say an atom in its gaseous phase, if you remove an electron, it becomes more positive, so it becomes a positive ion. Good example, you could have sodium gas, you remove an electron, so it becomes Na+ gas plus the electron we removed.
Now, remember, what are you doing? You're technically breaking a bond. You're removing an electron, so you're breaking a bond. We're going to say breaking bonds is basically an endothermic reaction. Endothermic or endergonic since we're dealing with energy. In either case, whether you describe it as endothermic or endergonic, both are saying the same thing. We're breaking bonds. When we're breaking bonds, the energy is going to be above zero. Just remember, breaking bonds means it's an endothermic or endergonic reaction. That means that our change in energy will be above zero.
When we form bonds, the change in energy will be less than zero. That would be an exothermic or an exergonic reaction.

Ionization energy is the energy required to remove an electron from a gaseous element. 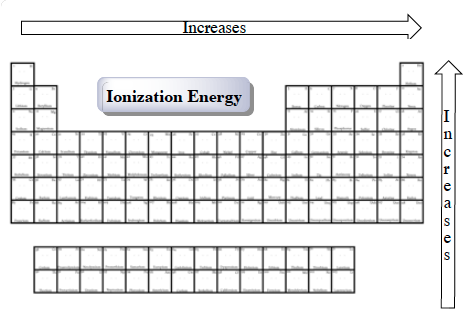 Concept #2: Exceptions to Ionization Energy in Groups 5A & 6A

We're going to say, generally speaking, ionization energy increases going from left to right and decreases going down a group. But there are exceptions to this. There's two major exceptions you need to remember. We're going to say when in the same period, group 6A elements, even though they're more to the right, actually have a lower first ionization energy than groups in 5A. Group 6A elements, when they're in the same period, actually have lower ionization energy than group 5A in the same period.
Let's take an example here. Here we have oxygen and nitrogen. Oxygen is in group 6A. Nitrogen is in group 5A. They're both in period 2, so they're both in the same period, so this rule applies to them. Now, oxygen, it's electron configuration would be 1s2, 2s2, 2p4, and nitrogen would be 1s2, 2s2, 2p3. It would be up, down, up, down, up, up, up, down, up, down, up, down, up, up, up. Remember, this is the way we would fill it in following Aufbau principle where we go from 1s to 2s to 2p. Then when we get to 2p, those electrons are degenerate again. They have the same energy, so we half fill them first using Hund's rule.
Now, think about it like this, ionization energy is the energy it takes to remove an electron. I'm going to remove the last electron that I added when I created this electron configuration. The last electron I added was this one that's pointing down. When I remove it, my electron configuration then becomes 1s2, 2s2, 2sp3.
It's best if p just like d is totally half-filled or totally filled in. By removing that electron from oxygen, oxygen becomes half-filled. That's more favorable here than having two half-filled ones. It's more favorable to have our p or our d totally half-filled, like we do here, or to have them totally filled in.
Now if we remove the last electron we added for nitrogen, we remove this one, it becomes this. This is less favorable because we just said, p, just like d, prefers to be half-filled or totally filled in. Nitrogen started off as half-filled, so it's very unlikely and not really favored if we try to come in and take off that electron because then it stops being half-filled. That's why oxygen actually has a lower first ionization energy than nitrogen.

Concept #3: Exceptions to Ionization Energy in Groups 2A & 3A

Now, we're going to say there's another exception. We're going to say when in the same period, group 3A elements have a lower ionization energy than group 2A. Here we have boron. Boron's electron configuration would be 1s2, 2s2, 2p1. Beryllium would be 1s2, 2s2. They're both in the same period, so this rule applies to them. This would be up, down, up, down, up. This would be up, down, up, down.
Now, we want to take off an electron using ionization energy, so we take off the electron that was added last, so we would be removing this electron from boron leaving us with one up, one down, one up, one down. This is highly favored because everyone is paired up. Remember, you want to either be half-filled if you're in p or d or totally filled if you're in p and d. If you're s, you want to be totally filled in. S is most favorable when both electrons in that orbital are paired up to each other. They're completely filled in. So this is great.
Beryllium, we'd be removing this electron here. We'd be left with that. We'd be left with a half filled s orbital. Highly unfavored. You want the s orbital to be totally filled in. So by removing an electron, boron actually becomes more favorable, so that's why it's better that it has a lower ionization energy than beryllium.
Just remember the common trend of ionization energy is this, but then remember the two exceptions. Group 6A has lower first ionization energy than group 5A if they're in the same period. If they're in different periods, then we go back to the default trend we talked about when we looked at the chart. We're going to say group 3A has a lower first ionization energy than group 2A when they're in the same period. If they're not in the same period then we go back to the default rule, which would be this rule. That exception only works if the elements we're talking about are in the same period with each other.

Example #1: Of the following atoms, which has the smallest second ionization energy?

Practice: Of the following atoms, which has the smallest third ionization energy?

Practice: Which of the following statements is/are true?

a. Sulfur has a larger IE1 than Phosphorus

b. Boron has a lower IE1 than Magnesium

c. Magnesium has a higher IE1 than Aluminum