🤓 Based on our data, we think this question is relevant for Professor Bailey's class at BYU.

The genotypes of the parents are therefore HHFF and hhff. There aren't enough information to give further distinction between the father and the mother.

A. What were the genotypes of the mom and dad monsters.

B. What are the genotypes of the babies?

C. If I crossed a baby brother with a baby sister, what would the expected genotypic and phenotypic frequencies be? 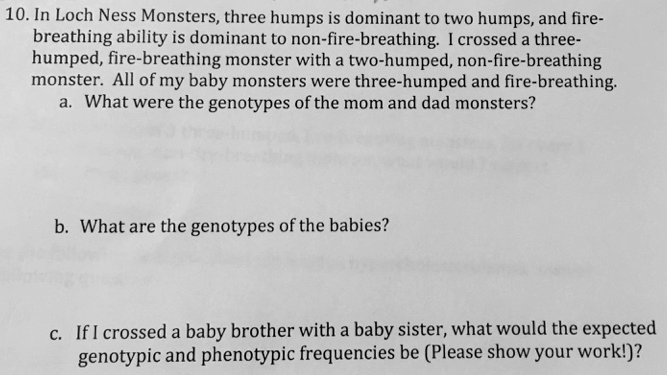 Learn this topic by watchingIndependent Assortment Concept Videos
All Biology Practice Problems Independent Assortment Practice Problems
Q.In foxes, two alleles of a single gene, P and p, may result in lethality (PP), platinum (Pp), or silver coat (pp). If you breed two platinum foxes and...
Q.Cystic fibrosis in humans is caused by recessive mutations in a single gene located in an autosome and follows mendelian laws. A normal couple has two...
Q.A brown mink is crossed with a silver mink. They produce all brown F1 offspring. These brown F1 offspring were crossed among themselves. What is the r...
Q.Mating oif two organisms produces a 1:1 ratio of phenotypes in the progeny. The parental genotypes are:A. Aa x AaB. Aa x aaC. AA x aaD. AA x AA
See all problems in Independent Assortment
×