🤓 Based on our data, we think this question is relevant for Professor Ratliff's class at USF.

The charge of proteins and polypeptides would depend on the condition of the dissociable protons along the chain. These include the protons in the C terminal, the N terminal, and the side chains.

The protons in the C terminal and in the acidic side chains dissociate at pH lower than 7. This leaves a negative charge from each of those substituents. Meanwhile, the protons in the N terminal and those of the basic side chains dissociate at pH above 7. As long as these protons are attached to those basic groups, they will have a + charge per substituent.

What is the charge of the tetrapeptide Lys-Lys-His-Glu at pH 7? 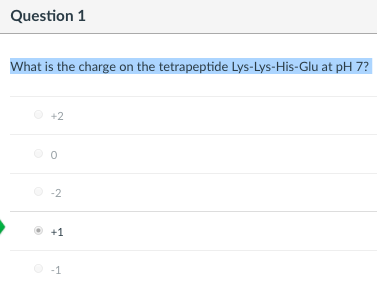 Learn this topic by watchingProteins Concept Videos
All Biology Practice Problems Proteins Practice Problems
Q.Match the amino acid on the left with the fact on the right.
Q.Match each definition and example to the level of protein structure.
Q.A newly isolated protein was found to contain 0.533% tyrosine by weight upon amino acid analysis.(a) What is the minimum molecular weight for the prot...
Q.You are given a solution of "protein X". Protein X consists of 250 amino acid residues: 38% are valine, 24% are alanine, 20% are glycine, and 18% are ...
See all problems in Proteins
×