A single, 18-amino acid peptide chain is to be assigned from the following experimental information below, your job is to provide the full triple lettercode sequence (if possible) and show your logic behind your answer.

(ii) Dinitrofluorobenzene (FDNB) analysis indicated the presence of C on reaction of the native peptide.

(iii) The native peptide is subjected to DTT and Pepsin Digestion of the native peptide produced 4 peptide fragments that were then exposed to Edman degradation analysis, they provided the following sequence information:

(v) The resultin 11mer was HPLC isolated and exposed to TCEP, this peptide was subjected to Trypsin digestion followed by amino acid analysis. The Trypsin digested peptide fragments: A, B, andC, were assigned the following amino acid composition: 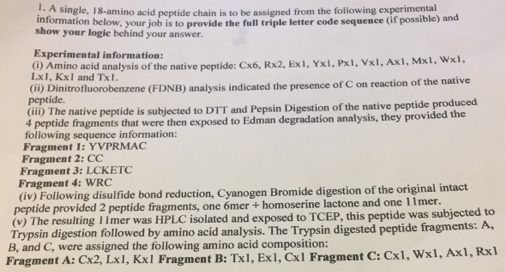 (i) This will serve as the amino acid reference for the sequence analysis. The amino acids (AAs) that are key to the peptide's reaction to different chemicals and enzymes should be noted.

(ii) FDNB analysis determines the AA in the N terminal of the peptide:

(iii) DTT is used for reduction of disulfide bonds to recover the linear primary structure. Pepsin digestion cleaves the N side of the amino acids L, F, W, and Y. Thus, these amino acids should be the starting AA of each fragment, except for the established first AA, which is C. Thus Fragment 2 is first in the sequence.

Q. The toxin associated with the foodborne disease botulism is a protein. To avoid botulism, home canners are advised to heat preserved foods to boiling ...

Q. Describe the structure of protein (e.g. primary, secondary, tertiary... structure etc.) with the driving force of maintaining the structure.