Which of the following types of data could be compared during the construction of a phylogenetic tree?

b. Base sequences of two different genes from two individuals of the same species

d. Base sequences of the same gene from two individuals of different species

Refer to the table below. 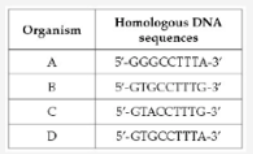 The table summarizes base sequences of homologous regions of DNA in four different organisms. According to these data, which two organisms would be separated by the largest distance on a phylogenetic tree?

Learn this topic by watchingPhylogeny Concept Videos
All Biology Practice Problems Phylogeny Practice Problems
Q.Why is the sequence similarity generally higher when comparing two globins from mammals than when comparing a globin from a mammal and a globin from a...
Q.Distinguish phylogeny from taxonomy and list one example where each is used.
Q.Compare and contrast plant and animal cells.
Q.Which of the following statements is true of the parsimony method for reconstructing phylogeny?a. The preferred phylogenetic tree under the parsimony ...
See all problems in Phylogeny

What is the difficulty of this problem?

Our tutors rated the difficulty ofWhich of the following types of data could be compared durin...as high difficulty.

Our expert Biology tutor, Kaitlyn took 11 minutes and 56 seconds to solve this problem. You can follow their steps in the video explanation above.